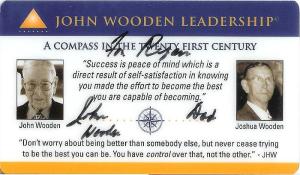 Today I will share probably my all-time favorite TTM autograph success, a return from arguably the greatest coach in basketball history, John Wooden.  Wooden coached UCLA to 10 national championships, including a string of 7 consecutive from 1967-1973 .  He also won a championship with Purdue as a player in 1932.  He was inducted to the Basketball Hall of Fame as a player in 1960 and as a coach in 1973.

Coach Wooden signed two 2001 Greats of the Game cards in under two weeks back in 2008.  He also included his own leadership card, all three cards personalized.  Thank you Coach Wooden for your contributions to the game and to life.  We miss you!