Pickups of the Week: Ben Hansbrough and Damjan Rudez autographs

Autographs from a couple of past Pacers came in the other day. Ben Hansbrough appeared in 28 games during the 2012-13 season for the Pacers. His best game as a Pacer came on April 17th, 2013 against the 76ers. He scored 11 points and handed out 3 assists in 17 minutes. He also appeared in six playoff games during the Pacers’ run to the conference finals, where they lost to Lebron’s Heat in seven games.

Rudez has three NBA seasons under his belt, each with a different team. He started out with the Pacers in 2014, playing in 68 games averaging just over 15 minutes per game. Primarily a three-point specialist in his time with the Pacers, he shot over 40% from long range. Originally from Croatia, Rudez scored in double-figures in nine games. He also played for Croatia in the 2008 Olympics in Beijing, appearing in two games. Croatia finished 3-3, falling in the quarterfinals to eventual runner-up Spain.

The Hansbrough is from 2012-13 Panini Innovation basketball from the Innovative Ink set. It looks like the last Innovation set came out for the 2013-14 season. The 2012-13 set also included Stained Glass cards.

The Rudez autograph is from 2014-15 Panini Court Kings. While I’ve never opened a box of Court Kings, I’m a fan of the brand. I think I would bust a box if there were more packs/cards per box. This release had ten cards per box. Would have been nice for this to be an on-card autograph but I like the design on this card.

The most satisfying part of this pickup is being able to add these two on my All-Time Pacers autograph list.

Pulling a Hokie, a rare event

I graduated from Virginia Tech in 2008. Hard to believe we’re closing in on ten years. I attended nearly every Hokie home basketball game during my four years at VT, and am arguably a bigger Tech basketball fan than football (although I obviously cheer for both). Buzz Williams has the program on the rise, and I’m excited to see what the program can do coming off its first NCAA Tournament appearance since I was in school.

The Hokies currently have one active NBA player who finished his career at VT (another who played for the Hokies and transferred, Dorian Finney-Smith) and generally have none, so it’s rare to see a Hokie with a basketball card for me to pickup. That one active player is Malcolm Delaney, who’s positioned himself as the backup point guard for the Atlanta Hawks, averaging just over 17 minutes per game during the 2016-17 season. 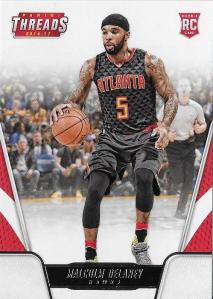 When I opened a 15 card pack of 2016-17 Panini Threads after a recent trip to Target, pulling a card of Delaney wasn’t even on my radar. I had no idea he was in a current card set. Surprised and pumped are the two words to describe my mood after I found this card a little over halfway through the pack. This is the only set I’m aware of Delaney appearing in so far. I’m hopeful he’ll keep his backup point guard role and appear in more sets next season.

Here are the highlights from the rest of the base cards. Whiteside has really blossomed in Miami into a top tier player. Rodney Hood has become a key player for the Jazz, and will be especially critical with Gordon Hayward leaving in free agency. I also had to highlight the only Pacer out of the 15 card pack, Jeff Teague. I was not a fan of swapping George Hill for Teague, but now both players have moved on to other teams. Teague recently signed a deal to go to Minnesota, and the Pacers brought back Darren Collison and traded for Cory Joseph. I’m OK with the combination of players the Pacers have at the point guard spot now. Jeff never seemed to find his groove with the Pacers. Regardless, good luck in Minnesota! That is going to be an exciting team to watch. 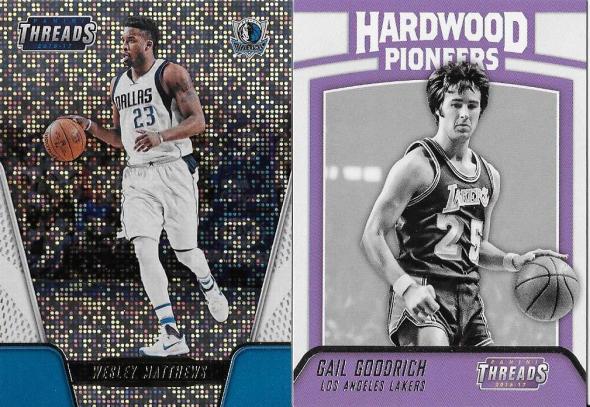 Here are the non-base cards from the pack. I’m certainly a sucker for parallels like this Dazzle parallel, although all the variations can be a little much. Could do worse than Wesley Matthews as the pull.

The Hardwood Pioneers have Dazzle variations as well- this Gail Goodrich is the plain verison.

Here’s a complete list of the cards I pulled in case folks out there are tackling the set.

I’m interested in trading for other Malcom Delaney cards from this set (parallels, autographs), as well as other Pacers from this set.

I’ve picked up where I left off, with the first pickup in my return to basketball card collecting being an addition to my Indiana Pacers autograph collection. The goal here is to get an autograph of every player to appear in a regular season game for the Pacers, preferably on a card in a Pacers uniform, if possible.

I’m going to be sharing my progress so far over a series of posts, but my most recent pickup is an autograph card from 2013-14 Panini Totally Certified Basketball of Herb Williams. This is player number 79 I’ve added to the Pacers autograph collection. 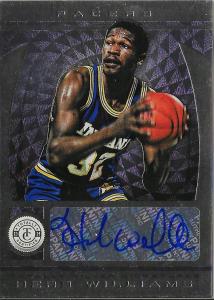 Herb recorded his best statistical seasons as a Pacer, averaging a career best 19.9 points per game in the 1985-86 season. The team finished 26-56 that year, though. Herb got his first taste of the playoffs with the Pacers in 1987, starting four games as the Pacers lost to the Atlanta Hawks 3-1. He played 57 career playoff games, most with the Knicks, and many of those in key series against the Pacers. He played until he was 41 years old, retiring after an impressive 18 year NBA career.

He served as an assistant coach with the Knicks and served as head coach for 39 games during the 2004-05 season after Lenny Wilkins resigned.

Glad to add this auto of Herb Williams to my Pacers autograph collection. The card looks better in person than in the scan. It is a sticker auto and I may look to add an on-card auto down the line. I’m not aware of a certified autograph with Herb in a Pacers uniform that isn’t a sticker, though.

A Return, of sorts

Hello to the blogosphere. When I started this blog back in the summer of 2011, it was because I noticed a void of basketball card blogs in the hobby and wanted to show some of my collection and talk about the hobby I’ve been a part of since I was a child. Now I am thirty years old with a baby boy, hoping I can pass to him a love of basketball, and with that a way to enjoy the sport more, and something we can share.

I was excited to interact with other collectors, get their opinions and discover parts of the hobby I had missed or overlooked. A few other basketball card blogs came and went, and my site grew over the years it was active. But I noticed the baseball card portion of the blogosphere was infinitely larger and more active. And so in 2014 after a 2 year hiatus, I started a baseball card blog, Card Stacks Blog, and started to follow MLB more and pick up Atlanta Braves cards and a few other players. I certainly don’t plan to completely abandon that blog and will post there when the urge strikes me.

I found that sports card bloggers are incredibly generous and are eager to interact and exchange cards. I am hoping that there is an audience for a basketball card blog. It may not have as many box breaks as it did when I had more disposable income, but I will open the occasional loose pack and continue to share cards from my collection. I also hope to send cards that don’t fit into my collection to other collectors, and add some recent Pacers. I’m less of a ‘hit’ collector these days, but I won’t turn them away and I am still looking to add autographs of Pacer players. I have 0 cards of Myles Turner who looks to be a superstar in the making. Paul George has also become a superstar over the past several years. The NBA as a whole has changed a lot and I hope to add some league commentary as well.

I can’t make a post without showing some cards, of course. Last year I opened a blaster of 2015-16 Hoops for the purpose of giving cards to kids on a youth basketball team I coached. I kept a couple of Pacers.

The only guy still on the team is Stuckey. Budinger and Sloan have moved on. In fact, the Sloan is actually a Nets card. For a third string point guard, Sloan was a bargain for what he brought to the team. 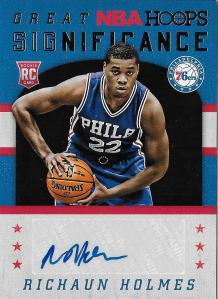 I also pulled an autograph. Holmes is a second round pick in the 2015 draft out of Bowling Green. He’s received some decent minutes with the 76ers and also spent some time in the Developmental League this season. Would like to send this to a 76ers collector. It looks like there’s some hope for fans with this team with Embiid looking like a star.

I’m excited to update this blog again. Are there any basketball card collectors out there in the blogosphere?

Since I started collecting back in the mid-90s, my focus has always been on collecting ‘any and all Indiana Pacers cards, past or present’. The mid-to-late 90s Pacers will always hold a special place in my heart and in my basketball card collection. Guys like Mark Jackson, Rik Smits, Jalen Rose, Dale and Antonio Davis, and of course the great Reggie Miller are my favorite players of all-time, and I doubt that will ever change. After that era of Pacer basketball, players like Jermaine O’Neal, Jamaal Tinsley, Ron Artest, Al Harrington, Stephen Jackson, Mike Dunleavy, Troy Murphy, along with lesser-knowns, have come and gone. While exciting to watch, now that these players have moved on, I can’t say I go and regularly look through my collections of these guys like I do the cards of Pacers from the 90s.

How this impacts my collecting habits today? Well instead of collecting any and all Pacers, I’ve found myself shifting my focus to other favorite players not wearing a Pacer uniform, along with the key guys on the current team (currently Danny Granger, Paul George, Roy Hibbert, etc…). And so my Tim Duncan collection has taken off, I’ve added autographs of other greats such as Tony Parker and Paul Pierce to my collection, and I’ve put together small collections of Kevin Durant and Grant Hill. I’m pleased with this shift so far, and while I’ll always collect the Pacers, I won’t have to look back in 10 years and try to remember how I ended up with so many cards of Ike Diogu or Shawne Williams. Plus, I’ll still have these guys covered in my All-Time Pacers autograph collection.

With all that said, I’ve picked up some recent Duncan inserts to add to the collection. Pretty excited about the Star Power Plus in particular. 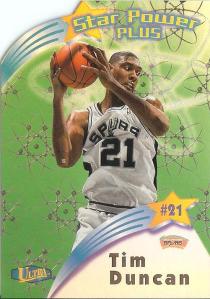 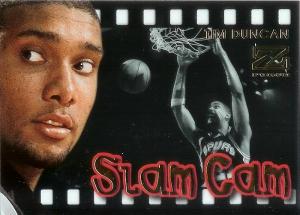 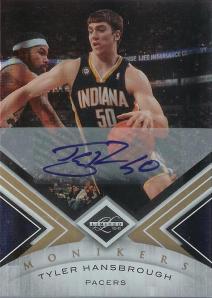 A few more Pacer autographs came in over the past few days to add to the collection.  The O’Neal Pristine autograph is an instant favorite for me.  Always wanted to add an autograph from this set to my collection.  Absolutely beautiful set.

Cards above are as follows: 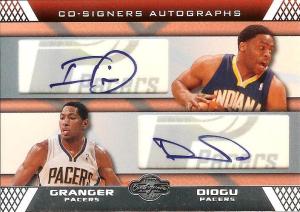 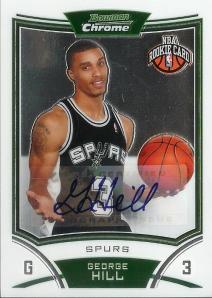 Excited to get these in recently to add to my Pacers autograph collection.  The cards are:

More to come in the next few days!