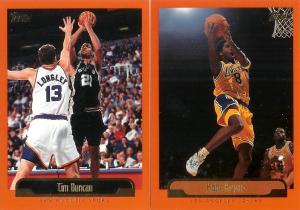 Our Break:
Without going in and counting, I am fairly certain we opened a complete set of base cards, while also seeing many, many duplicates.  We probably have close to 10 Danny Ferry base cards, so any Danny Ferry collectors, hit us up.  The orange bordered base set might be my least favorite Topps base set of all-time.  The action photos are nice (gotta love young Kobe hanging in the air pre-layup/dunk in the photo above), but who are we kidding, we opened this box for the inserts and a chance at a Topps Autograph (reasonably inserted at 1:98 packs, basically every third box). 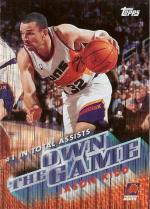 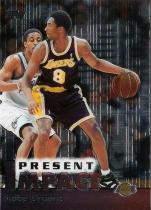 Fantastic value, beautiful inserts.  Our box looks like it contained pretty standard results for this product.  It was right on the odds for the inserts, didn’t hit on any of the higher odds inserts such as the Impact Refractors or the Autographs, but did pull several nice inserts that had lower odds (Shaq, Kobe).

Pick up this box if you don’t want to break the bank (you can find a box for under $30), but still have a shot at some nice autographs and inserts.  Really can’t stress enough how great these insert sets are.  These types of cards are what is missing from today’s products.  The scans in this post don’t give an accurate picture of how nice these cards look.  Give me these over a game used card of Andres Nocioni any day (nothing personal, Andres- we actually could pull one of these in our next break, 10-11 Totally Certified).