Since I started collecting back in the mid-90s, my focus has always been on collecting ‘any and all Indiana Pacers cards, past or present’. The mid-to-late 90s Pacers will always hold a special place in my heart and in my basketball card collection. Guys like Mark Jackson, Rik Smits, Jalen Rose, Dale and Antonio Davis, and of course the great Reggie Miller are my favorite players of all-time, and I doubt that will ever change. After that era of Pacer basketball, players like Jermaine O’Neal, Jamaal Tinsley, Ron Artest, Al Harrington, Stephen Jackson, Mike Dunleavy, Troy Murphy, along with lesser-knowns, have come and gone. While exciting to watch, now that these players have moved on, I can’t say I go and regularly look through my collections of these guys like I do the cards of Pacers from the 90s.

How this impacts my collecting habits today? Well instead of collecting any and all Pacers, I’ve found myself shifting my focus to other favorite players not wearing a Pacer uniform, along with the key guys on the current team (currently Danny Granger, Paul George, Roy Hibbert, etc…). And so my Tim Duncan collection has taken off, I’ve added autographs of other greats such as Tony Parker and Paul Pierce to my collection, and I’ve put together small collections of Kevin Durant and Grant Hill. I’m pleased with this shift so far, and while I’ll always collect the Pacers, I won’t have to look back in 10 years and try to remember how I ended up with so many cards of Ike Diogu or Shawne Williams. Plus, I’ll still have these guys covered in my All-Time Pacers autograph collection.

With all that said, I’ve picked up some recent Duncan inserts to add to the collection. Pretty excited about the Star Power Plus in particular. 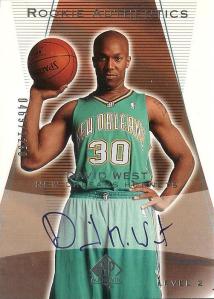 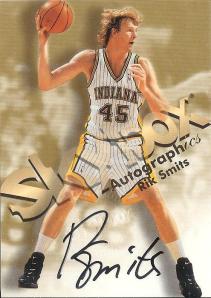 Excited about adding these three cards to the Pacers autograph collection, which now includes autographs of 76 different Pacer players.

David West’s SP Authentic rookie autograph can be had at a reasonable price.  He is still capable of a double-double on any given night.

Lou Amundson is becoming a fan favorite in Indiana with his high energy and constant hustle.  He scored a career-high 21 points last week  to lead the Pacers over the Portland Trailblazers.

And of course Rik Smits is an all-time Pacer great who is fairly short on different autograph cards, only included in a few sets, Skybox Autographics from the mid-late 90s, as well as the 2005-06 Topps Style set.