Once again, all participants made it through:

All contestants made it through yesterday:

The next few days will get interesting as there are less games to choose from. Monday’s game are:

Make sure to get those picks in before 7 pm eastern tomorrow. Good luck!

All contestants made it through yesterday:

If you made your pick for today in yesterday’s post, it will count and you don’t need to re-post here. Picks will lock in by 1 pm eastern when the first game starts.

Games on day one of the playoffs are as follows:

Make your pick by posting a comment on this post. Remember, you choose one team from the games above. If that team wins, you survive to the next day of the playoffs. Be sure to use the same name each time you pick. You only have one comment to make your pick. Once it’s made, no editing or changing your pick. Picks will lock in once the first game begins on Saturday. Good luck and spread the word on the contest!

Hoops Hobby will play along. Hoops Hobby’s pick for day one is, the Miami Heat.

We are just days away from the start of the 2012 NBA playoffs which should be excellent once again. Absolutely my favorite sports time of year. As mentioned, Hoops Hobby will be hosting an NBA Playoff Survivor pick’em. Each day of the playoffs, Hoops Hobby will post the games for the day. Each contestant should respond with a comment containing their pick for the day. Pick any team playing that day. If they win, you move on to pick another day. No limits on how many times you can pick a team. If you want to pick the Bulls every time they play, for example, go for it. Last contestant alive wins a card of their choice from the prize list below. Additional prizes will likely be added to this list. Once we have one winner we will start up again for as many rounds as we can throughout the playoffs.

The prizes are as follows:

Spread the word- this will be fun. First post will go up when playoff pairings and times are announced. 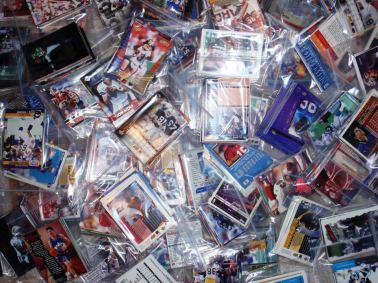 I recently came across a post on the Panini America blog describing a local charity that collector Mitchell Kennedy started called Sports Cards for Kids. 15 year-old Mitchell is putting together hundreds of packs of 20 cards each and distributing them to local Boys and Girls clubs and children’s hospitals. He is reaching out to local athletes as well such as Panthers WR and former Appalachian State star Armanti Edwards, who was willing to sign and return cards for Mitchell to include in his packs.

Mitchell was nice enough to answer a few questions over the weekend about his charity and about collecting in general:

Hoops Hobby: How did you get started in collecting sports cards?

Mitchell Kennedy: I have been a big sports fan since I was 10, and I started to collect a card for every player on my favorite teams (Panthers- football, Bobcats- basketball, Hurricanes- hockey, Mets- baseball, and some UNC cards)

HH: What prompted you to start Sports Cards for Kids? How did you come up with the idea?

MK: I had some extra cards and told my mom to give them to someone she knew that did not have a lot and she told me one day that the child that got them still had one of the cards by his bedside. So I thought that I could make this a big thing and give cards to a lot of kids.

HH: Do you have a favorite moment or story with the kids since you’ve started Sports Cards for Kids?

MK: I have two, the first one is when I gave out the first Armanti Edwards autographed cards. The kid who received it went back to his table and said “Does anyone want to trade for this?” and many people said yes. Then after the reactions from the other kids said “Sike!” The second one is when I gave a Albert Haynesworth jersey card (in Pats uniform) to a Patriots fan and when I came back almost 10 minutes later the same kid had the card in his hand feeling the jersey.

HH: What makes the hobby exciting to you and keeps you collecting?

MK: It is exciting to me because when you go to your local hobby shop and get a pack of cards there is always a chance to get a great card. Also, there are always new and exciting players that join your teams. ex. Cam Newton

This is a fantastic cause that I would encourage you all to support. If you have an interest in donating you can mail cards to the following address:

One important note on donations- they should be cards from 2005 to present, so players will be more recognizable to the kids. Hall of Famers and retired stars are encouraged as well.

You can also ‘like’ Sports Cards for Kids on facebook as well as find out more information about the charity at http://www.sportscardsforkids.org/ 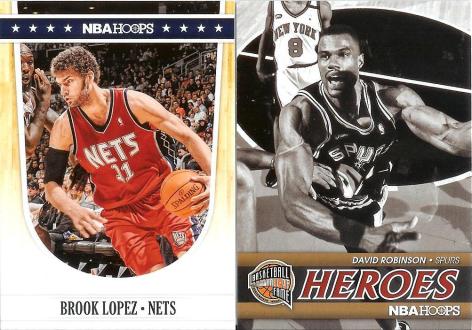 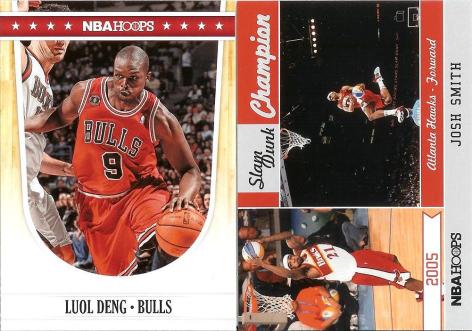 Once the playoffs begin, Hoops Hobby will hold a survivor pick’em contest on the blog. Each day of the playoffs, participants must pick a winner of a game. One wrong pick means elimination. The last contestant remaining will not only earn the title of ‘Hoops Hobby Survivor Champion’, but a prize as well. More details to come- stay tuned! 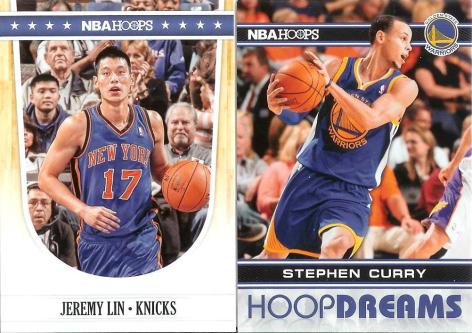 Not having opened any packs of 11-12 cards yet this year, I decided to pick up four hobby packs of the relatively new Panini Hoops product from a local card store. I am opening a pack a day and posting the results to give an idea of what the typical pack contains. The first pack had the following:

Already a fan of the inserts- an inexpensive set paired with sharp looking inserts make a good product for me.