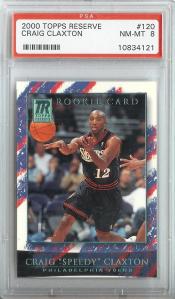 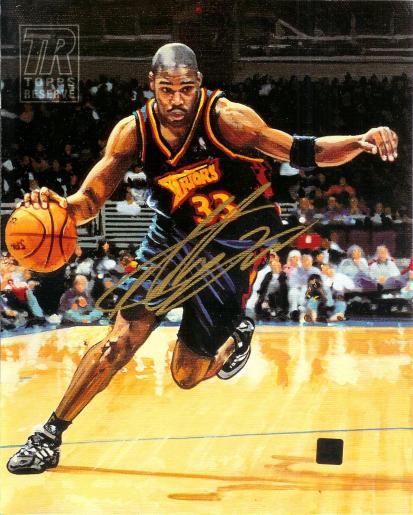 A unique set in several ways.  This was the only basketball set from Topps released under the ‘Reserve’ name, evolving from the ‘Gallery’ brand.  The card fronts have paint splotches to make up the card borders, with a game action shot centered to create the appearance of a canvas.  The card backs have some stats not typically included, showing how the player performed on various days rest (0,1,2,3+), in addition to season averages.  It was a bit disappointing to open any duplicates at all considering we opened less than half the base set, but could have been worse.

Something else that doesn’t make much sense to me is including anything less than PSA 9 graded cards in the box.  Unfortunately this wasn’t a great rookie class either.  We were fortunate to open one of the few still in the league as our regular rookie in Jamal Crawford.  Some of the other top rookies in this set are Kenyon Martin, Mike Miller, Hedo Turkoglu, and Stephen Jackson.  Yeah… ouch.

In 2000 the early craze for game used cards was in full swing.  A set of relic cards from All-Star weekend was a nice change.  Clearly there is a chance to open cards of some of the league’s best in this set, such as Stockton, Malone, Shaq, Duncan, Hill, Robinson, but also some up-and-comers at the time in Dirk Nowitzki, Paul Pierce, etc…

The draw of this box is of course the 8×10 canvas, with the grand prize being a Shaq or Magic Johnson autograph.  We weren’t lucky enough to open one of those, but Jamison isn’t a bad consolation.  The others on the checklist are Jermaine O’Neal, Elton Brand, Shawn Marion, Andre Miller, Baron Davis, Steve Francis, Wally Szczerbiak, Keyon Dooling, Larry Hughes, Mike Bibby, and Maurice Taylor.  The big prizes at the time were likely Brand and Steve Francis, the star rookies from the previous year.

If you want a different box-opening experience, as well as a chance (a slim one) at a Shaq or Magic canvas, this is a low-risk box that could result in a high-reward.