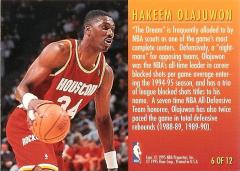 Why I Like It:
I opened more packs of 1995-96 Fleer than I’d care to admit in my early collecting days.  I was drawn to the set because of its variety of styles and patterns.  It’s also a large set so I didn’t find myself pulling the same players all the time.  The Total D set points out the defensive powerhouses of the mid-90s, such as ‘The Glove’ Gary Payton, shot-blockers Olajuwon and Mutumbo, and lockdown perimeter defenders in Jordan and Pippen.  The back description shares the player’s accolades on the defensive side of the floor.

While the uptempo, flashy offenses are often more fun to watch, getting crucial stops down the stretch wins games.  The Dirk-led Mavs finally broke through and won the championship last season after acquiring their defensive anchor in Tyson Chandler.  It’s hard to see them matching that success this season with Chandler now in New York.  Defense certainly matters, and these guys, showing their ‘Total D’, were the best at proving it.