Retired Pacers and a Contest

Baseball card land is going crazy over 2017 Topps Series 1 release. And while I’ll probably pick up a blaster or loose packs myself, I am just as excited over a lot of former Pacers I picked up in the last week.

I recently came across my favorite type of ebay seller: One that offers free shipping and discounts with a certain number of auctions won, and one that has thousands and thousands of listings. I could browse those listings all day. I settled on an initial batch and in a few days they arrived! And here you have it, my first lot of basketball cards purchased in five years. I’m so excited about this lot of cards that I’m going to give some cards away. See the contest at the bottom of the post. 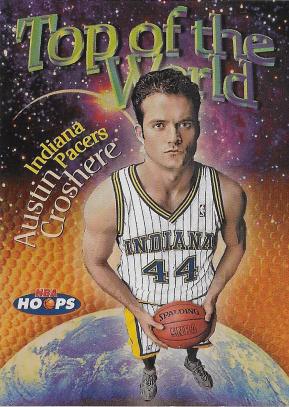 I’m pleased that Panini is releasing new cards of the Dunking Dutchman, Rik Smits. Anytime I see new Pacer cards of players from the 90s teams that had so many deep playoff runs, I get excited. While I still find new 90s cards of these guys, I’ve seen most of them, so it’s great to see new-to-me cards. This Smits fits the bill, and it’s #’d out of 199.

The Croshere is one of those new-to-me 90s cards. Is there an insert set that screams 90s more than this one? Some awesome insert sets were in NBA Hoops packs at the time at an affordable price point. I’m going to look to pick up the Duncan from this set for sure.

Croshere landed a nice contract after his great playoff performances in Indiana’s run to the NBA finals in 2000. That season and the following one were his best statistically for his career. He spent most of his career with the Pacers, finishing his career after 12 seasons. He now does radio for the Pacers, mainly road games when the legendary Slick Leonard is not available. 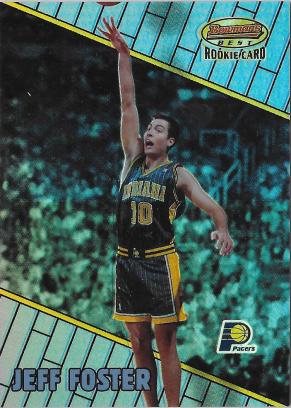 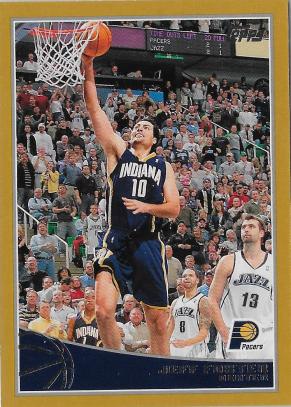 Foster is one of my top 5 favorite Pacers ever (Reggie Miller, Danny Granger, Rik Smits and Jermaine O’Neal are the others). He was the ultimate professional, doing whatever he was asked, even though he never had any plays run for him. That wasn’t his game. He was relentless in pursuing rebounds. Whether he started (which he did quite a bit) or came off the bench, you always knew what you were getting when Jeff came in the game. I also appreciate that he spent his entire career with the Pacers. One fun fact about Foster’s career: He is 4th all-time in career offensive rebounding percentage. He led the lead in this stat category twice during his career.

On the cards…can’t beat a cheap rookie refractor. These are the only cards that I may already have in my collection. Unfortunately I don’t have my inventory documented like I should, especially after a 4+ year break.

Two Prizm Prizms, whatever that means. I guess it means shiny. Jackson’s signature floater in the card on the left, and against the Knicks makes this card even better. Love the flo-jo jersey in the 2014-15 card. Can’t beat these two. I do like how the 2014-15 cards have game photos. That seems to have been taken away in more recent Prizm releases.

At one point Mark Jackson was 2nd all-time in NBA history in assists. He’s dropped to 4th, passed by Steve Nash and Jason Kidd. Still impressive and somebody you might not think of when you think of all-time NBA assist leaders. 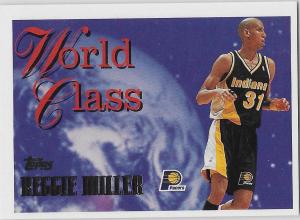 Again, a new card for my collection, hopefully. The insert set looks familiar so I am not liking my odds, but I couldn’t pass up the potential for a new Miller insert on the cheap. Reggie was a world class shooter, that’s for sure. 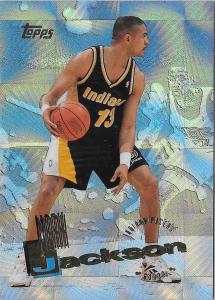 To me this is the gem of this group, which is why I have it last. Power Boosters were inserted 1 in 36 packs, which makes this a semi-rare pick up. This one is from series 2. Sadly this is the only Pacer player with a Power Booster parallel. Maybe I’m easy to please but for a dollar I was thrilled to get this one. It scanned great too which I was worried about.

So the contest! There are 8 players in the background of cards in this blog post. Name one in the comments to be entered for a chance to win. Must name a player not already named in a previous comment. Correct entries will be randomized and a winner chosen. The winner gets…

This Richaun Holmes autograph from 2015-16 NBA Hoops.  I will also try to send a handful of cards of your favorite team. Enter by end of the day, Saturday February 11th, 11:59 pm eastern. So there it is, the first contest since Hoops Hobby’s return to the blogosphere.

Philly and Boston were able to close out, while the Nuggets forced a game seven with the Lakers.

Down to four here very quickly. Only one game tonight.

Hoops Hobby takes the Grizzlies with the upset on the road. Make sure to get your pick in by 9 pm eastern!

Playoff Survivor Round Two: Day One, May 10th

Back for round two of NBA Playoff Survivor. The rules are the same as round one. Each day of the contest, pick a winner of any available game that day by leaving a comment on this post, and move on to pick the next day. Simple as that. Winner gets a prize from the list of cards in my post from yesterday. Round two starts with games for Thursday, May 10th. Picks must be in by 7 eastern on Thursday. Here are the games:

Hoops Hobby’s pick for Thursday, the Celtics to close out the Hawks at home.

Playoff Survivor: Round One Winner!

We have a winner for round one! Tony Kapuschinsky won by picking the Celtics last night who won in convincing fashion over the Hawks.

Tony should select a card and send an email to HoopsHobby@gmail.com with the card picked and the address the card should be sent to.

We will be starting another round of Survivor on Thursday, May 10th so spread the word and stay tuned!

Spurs pulled one out on the Jazz home floor last night, so both survivors remain for another day.

Celtics eeked out a win last night in overtime, so the contest continues:

Both have picked the Spurs for today, despite the options of four games. Spurs probably are the safest choice, though. I do think the Jazz might actually put up a fight today as they have a fantastic crowd and home court. Games today are…

Could today be the end of round 1 of Hoops Hobby’s Playoff Survivor? Will we have a winner? Yesterday’s dominating performance by the Thunder on the road knocked out four participants. So much for the Mav’s homecourt.

Three games to choose from today:

Good luck to our final two! Also, we will be starting a second round shortly after the first concludes, so stay tuned!

Had the potential for an upset last night but everyone left made it through.

Tonight will be interesting with some games that could be close.

Make sure to get those picks in by 7 eastern. Good luck!

Well we had a couple, HoopsHobby included, that finally picked incorrectly. Appears the Bulls had some trouble without DRose in the second half against Philly and the Celtics came back to even up their series at 1 with Atlanta.

Down to six contestants. Games for Wednesday are:

Good luck everyone. Make sure to get those picks in before 7 eastern.

All contestants made it through again yesterday:

Make sure to get those picks in before 7:30 pm eastern today. Good luck!