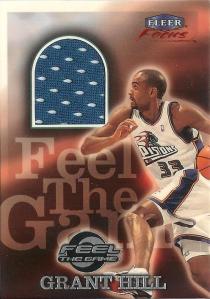 The 1999-00 Fleer Feel the Game sets were some of the earliest basketball game used card sets released. The Fleer Focus versions inserted at just 1 in 288 packs.  At those odds, I am surprised that the Grant Hill card pictured above has a high book value of only $20.  These can be had at an affordable price, they just don’t show up that often.

Question – Today, most products guarantee at least one memorabilia card per box, most more than that.  How has your enjoyment of the hobby been impacted by the decreased rarity of memorabilia cards?

NBA Finals Jerseys: Where Have They Gone?

While browsing on ebay over the past week I stumbled across several 2000-01 Topps Gold Label Finals Jerseys of key players from the 2000 Indiana Pacers’ only NBA Finals appearance in franchise history.  Look at the players from this set: Shaq, Kobe, Reggie, Mullin, Rice, Horry, Green, etc..  You better believe I snatched up ones I saw: 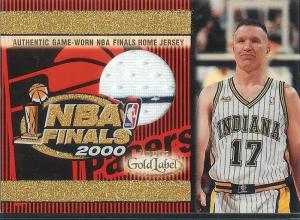 Most sought after cards in other years that finals-worn jersey sets were produced:

They don’t show up on ebay with much frequency.   Tell me that this type of insert set wouldn’t be one of the most highly sought after memorabilia sets year after year, particularly if featured in a higher-end product!  That’s why I was baffled to see that the last Finals Jersey set that I could find was from 2006-07 Topps products.  Hoping this type of set comes back soon in some fashion!