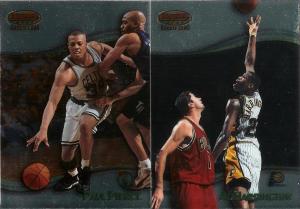 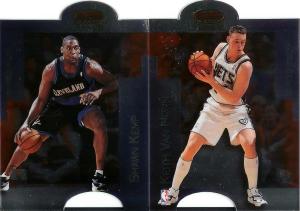 Wouldn’t take much to complete the base set of 100 cards, as we were just a handful short from our one box.  It’s always enjoyable to open 90’s products to see the league where the league was heading at that time.  You’ve got Shaq and Kobe just before their Finals runs.  The overlap of the end of Robinson’s career and the beginning of Duncan’s.  Pippen, Barkley along with Hakeem on the Rockets.   All of the base cards have golden strips at the top and bottom.  Imagine how nice these would have looked if these sections were colored to correspond with a player’s team colors.

1998-99 Bowman’s Best was one of the first products to have short printed rookie cards in the base set.  While we would have loved to have seen a Dirk rookie, Paul Pierce was a fine second choice.  The rookies, inserted at 1 in 4 packs, have the same glossy and metallic look as the rest of the base set, but have silver top and bottom sections, with a darkened background of an arena crowd.

The number of inserts in this product is certainly on the low side, particularly since only one refractor is usually included in each box.  This was also one of the first products to include serial numbered cards.  The refractor we did pull (Chauncey Billups) is really a beautiful card.  Could have done worse there for sure.

The chase inserts are the Kobe Mirror Image card and the Jordan Franchise Best card, and of course the refractor and atomic refractor versions of any of the inserts, which all have extremely tough odds.  The odds on the autographs are pretty mind-blowing as well.

A fun break, but half of the packs held nothing but base cards, and the inserts we did pull weren’t necessarily worth the wait.  Best card was probably the Pierce rookie.  One insert refractor, a Dirk rookie, or even a star refractor would have pushed this break another direction though.

Upcoming breaks for the next few editions of Wednesday Wax:

Really excited about both of these breaks!

Pickups of the Week: Absolute, Gold Standard, and Classics

Again, saw some nice Pacer autographs on ebay that I was able to purchase for reasonable prices.  The Granger is from 09-10 Absolute serial numbered to 49,  the Collison from 10-11 Gold Standard serial numbered to 299, and the George is from 10-11 Classics numbered out of 499.  Excited to add these three to my Pacer collection!

Why I Like It:
The True Colors insert set is meant to highlight some of the game’s clutch performers.   It’s tough to find a more attractive insert set these days.  I am still disappointed that Stadium Club Chrome was a one-and-done product.  The text on the back of each card points out a particularly clutch moment in the player’s history.  Honestly, all of the insert sets from Stadium Club Chrome were well done.   Maybe there will be a Stadium Club Chrome edition of ‘Wednesday Wax’ coming in the near future… 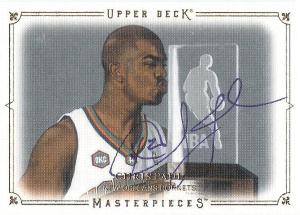 Received two cards back yesterday signed from Chris Paul in a little over a month.  This is one of my favorite successes to date.  What was neat about this return was that about a week ago, Chris Paul tweeted that he was working on returning his fan mail/autograph requests, even posting a picture.  Pretty cool stuff!  Thank you CP3! 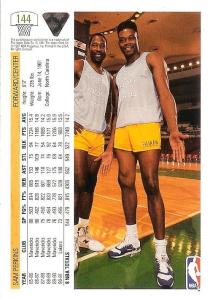 Sam Perkins is one of my all-time favorite players, but that doesn’t mean we can’t enjoy a humorous card featuring the ‘Big Smooth’.

Nothing exceptional about the front of the card.  On the card back, though, Smooth and James Worthy show off shorts they probably wore in their childhood.

For a second I thought James Worthy was standing next to the Fresh Prince of Bel-Air. 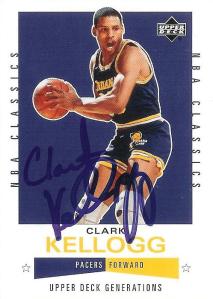 Received a Upper Deck Generations card signed by former Indiana Pacer and basketball commentator, Clark Kellogg.  This was from a handful of requests I sent out back on 7/27.  Probably my all-time favorite success to date. Not only did Mr. Kellogg return a card signed, but he also included a nice response to my letter.  He points out that the Pacers are moving in the right direction, and I can’t argue!  They now have a core group of young players that is only going to get better with more experience together.  Thank you, Mr. Kellogg, particularly for taking the time to write back!

Click on the image below to get a better look at the note:

Lots of base cards, lots of duplicates 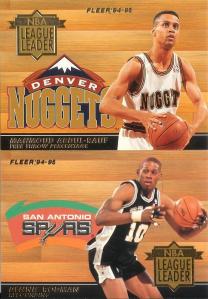 Have no reason to complain on much of anything from this box, as I got it off ebay for the price of most modern-day lower-end packs.  However, I couldn’t help but be slightly disappointed to pull multiples of inserts, particularly the three Vin Baker rookie sensation cards.  Also opened a ton of duplicates in the base set.  Pretty sure we came close to completing the base set, though.  Also had to spend a considerable amount of time pulling the cards apart.  Didn’t notice any damage to the cards because of this, though.

Inserts were inserted at 1 per pack, over a third of them being from the 25 card Rookie Sensations set.  Pulling the Penny Hardaway from this set was nice, and it ended being the best card in the box.  The chase cards from this insert set are the Hardaway and Chris Webber ($5 each).  The Pro-Visions cards fit together from what I can tell.  The Marshburn and Starks pictured above are cards 1 and 2 in the set, and their backgrounds run together.  Can’t argue with the variety of the inserts, pulling cards from 5 different insert sets.

It’s worth noting that the rookie cards from 1994-95 Fleer (Grant Hill, Jason Kidd, Jalen Rose, Eddie Jones, etc…), are in the series 2 products.

The base set design isn’t particularly exciting, but does feature nice action shots of the players.  The player name text also goes well with the splotch of color underneath.  The ding on the insert score is mainly because we pulled 5 duplicate inserts out of 24 packs.  We don’t need even 1 Vin Baker, and certainly not 3.  We also didn’t pull any of the inserts with tougher odds, even though we were likely to pull at least 1.  Again, a fun break, brings back a lot of memories of opening these as a kid.  Can’t argue with the value.  The Penny basically paid for the box all by itself.  While not as thrilling as the Flair break from last week, or even an Ultra break from the same year, it’s a solid product that delivers a lot of cards, a variety of inserts, and a reasonable amount of fun.

Pickups of the Week: 2010-11 National Treasures

Saw some good deals on ebay recently on Pacers from the new Panini National Treasures set.  All three of these are serial numbered out of 25.  Sharp looking cards from a nice product. 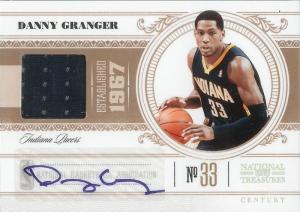 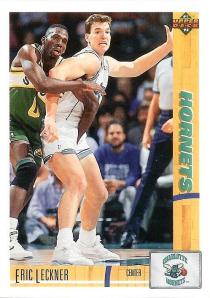 This card doesn’t need too much explanation, the visual is enough.  Based on the 1990-91 Supersonics roster, the player on the left is none other than Olden Polynice, aka Officer Polynice.  I wonder if these two are on speaking terms these days.

It’s worth noting that Leckner’s season averages in points and rebounds were never as high as they were after his mid-season trade to Charlotte in the 1990-91 season, which would have been when this game photo was taken.