This week I will highlight a favorite return of mine from shooting guard Eric Gordon, received back in early 2008 in about two weeks through Indiana University. 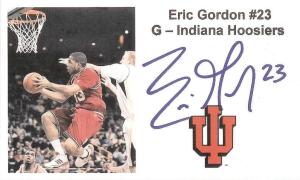 It’s always fun to speculate on which college players will become stars in the pros, and college players are often better signers through the mail than current NBA players.  This was a custom index card I sent out and was pleased with the result.

Gordon should be considered one of the top 10 players at his position, surging on an up-and-coming Clippers squad that could make some noise in the coming years with a solid young core of Griffin, Gordon, DeAndre Jordan (Restricted FA), and others.